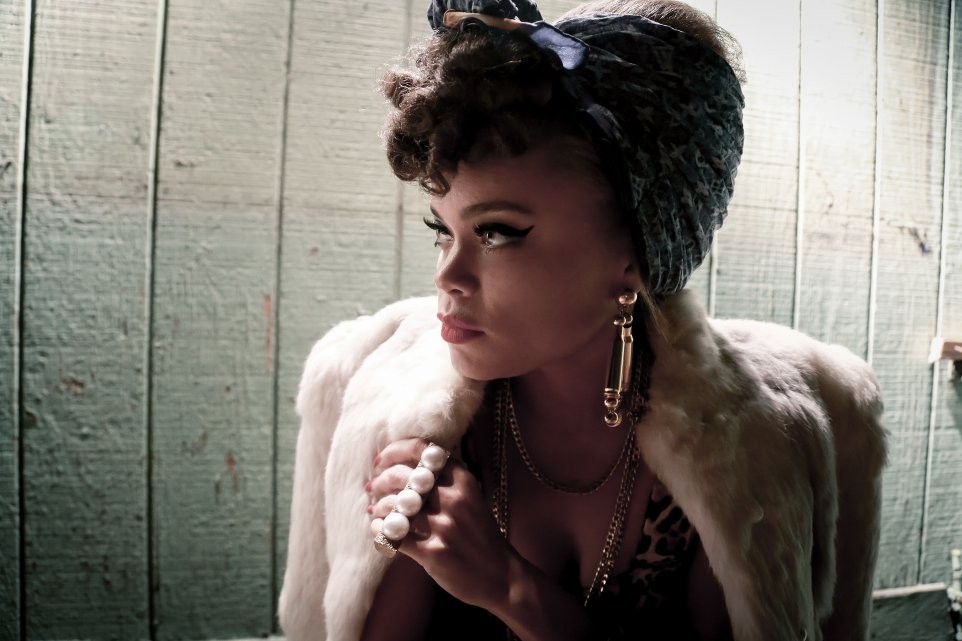 Fresh from her performance on the 58th annual Grammy Awards, where she performed in a duet with Ellie Goulding, Andra Day is definitely on the rise.

Day was twice nominated at the Grammys for Best R&B Performance for “Rise Up” and Best R&B Album for her debut album Cheers to the Fall. She did not win one of those gold statues but still, this incredible, old-soul, smoky-voiced, jazz-influenced singer has put the world on notice that she will be a force to be reckoned with for a long time to come.

Torontonians will get an opportunity to see Andra perform live with her band at the Black Diamond Ball at The Design Exchange on February 26th, 2016, presented by TD Bank and ArtXperiential Projects. This gala event is meant to cap off Black History Month Celebrations. Featured performers also include: Jully Black, Ray Robinson, Maestro, Gary Beals, Carlos Morgan and Vita Chambers among others. The Black Diamond Ball will host an entire day and evening showcase of the arts on February 26, 2016. The day will begin with a free interactive and educational expo that offers students an opportunity to learn from established local artists, songwriters, producers, business professionals and other key figures int Toronto’s creative community. The evening promises music, dance, fashion and culture.

Andra Day’s whirlwind media coverage has ensured that you will know her name. Day has been seen on shows such as such The Late Show with Stephen Colbert, CBS Saturday Morning, the BET Awards, ESSENCE Music Festival, Special Olympics, Good Morning America, Kimmel, Kelly & Michael and Wendy Williams, CNN Heroes, Shining a Light: A Concert for Progress on Race in America, Macy’s Thanksgiving Parade and the National Christmas Tree Lighting. And yes, who can forget her singing with Stevie Wonder in that Apple television commercial where they sang together on Stevie’s classic, “Some Day at Christmas.”

Day had a chance encounter with Stevie Wonder’s wife Kai. Mrs. Wonder heard her singing at a local store opening in San Diego and shared her music with her husband Stevie Wonder who then reached out to put her in touch with songwriter-producer Adrian Gurvitz (The Bodyguard). The 30 year old San Diego native went on to post online videos of herself singing her renditions of songs by Eminem, Muse, Amy Winehouse, Jess J and The Notorious B.I.G. and others. These performances soon caught the public’s attention and the buzz caught on like wild fire. The stripped-down songs, recorded at home, underscored Day’s vocal abilities, demonstrating a mastery of old-school soul, jazz and blues by someone way beyond her years. Ellen DeGeneres contacted her two weeks after the videos were posted to be a guest on her show and soon after, Day was signed by Warner Bros.

“Spike Lee is an incredible and legendary director with a great creative eye. At the same time he was very nurturing and understanding about my vision and how it would work with what he had in mind too. He gave great direction and he was really cool to be around.”

Several veteran producers were brought on board including Raphael Saadiq and Adrian Gurvitz who also co-write several songs on the album. Spike Lee also signed on to produce a video “Forever Mine,” for her. Last fall, Day went on tour with Lenny Kravitz in her first national tour. Speaking to Okayplayer about working with Spike, she says:

“Spike Lee is an incredible and legendary director with a great creative eye. At the same time he was very nurturing and understanding about my vision and how it would work with what he had in mind too. He gave great direction and he was really cool to be around. It was a much more casual environment than what I had drawn in my own mind. It was an amazing experience.”

Day cites her music influences such as Billie Holiday, Nina Simone, Sarah Vaughan, Etta James, Lauryn Hill and Amy Winehouse. That’s great company and if Day’s debut album is any indication, we will be enjoying her music for a long time. She begins her own headline tour on February 29th.