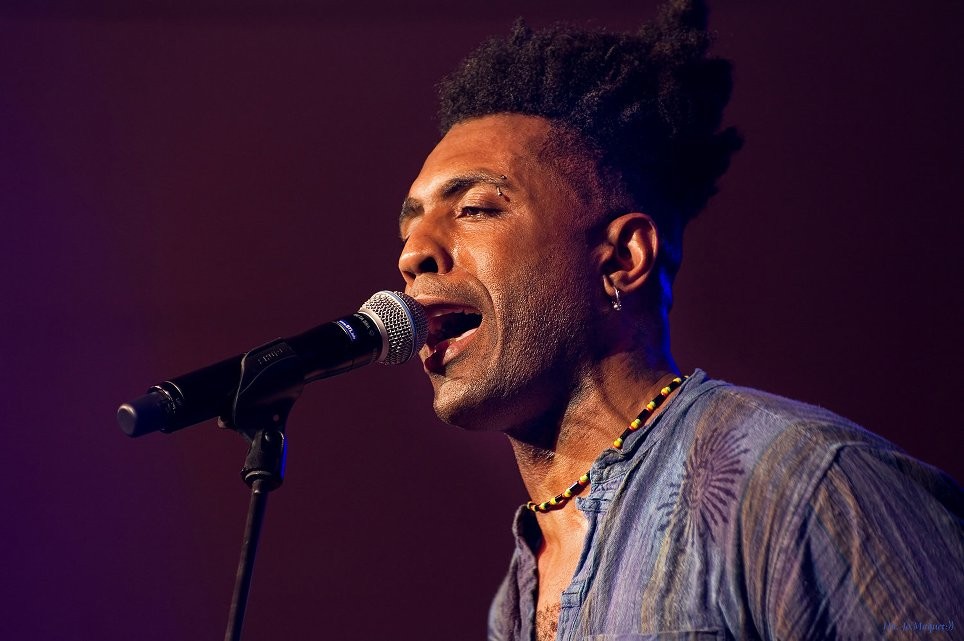 Omar, UK singer/songwriter and a godfather of neo-soul returns to Toronto.

Toronto’s ongoing love affair with soul music goes back several generations. Thanks to the clubs, the underground mixtape scene, house parties, radio and later – the internet, we were digging the music even when we couldn’t see these artists live . Of course there’s been standout artists throughout that time that get our pulse beating a little faster when you see them live here in the city. Prince comes to mind with two dates over the last 10 months. So does Stevie Wonder and Aretha. Britain’s Omar is one of those artists that inspires deep loyalty among soul music fans. Unfortunately, his performance in Toronto is a rarity. In fact it has been over a decade since Omar last graced a Toronto stage. So on April 23rd at The Capitol Event Theatre, he returns and will be joined by three soulful Toronto artists: Lisa Banton, Ivana Santilli and Glenn Lewis. WORD writer connected with Omar over a decade ago and provided us with this rare interview of Omar. Enjoy!

Back in the summer of ’95, a promising young Brit by the name of Omar announced that Toronto would be part of his first North American tour – an excursion taking in 18 U.S. and Canadian cities. The GTA soul and acid jazz massive were ecstatic and fans quickly gobbled up tickets.

After rousing shows stateside and in Vancouver, the classically trained singer/composer/producer came down with a throat infection, losing his voice, forcing him to cancel the Toronto and Montreal shows and return home. (cue collective groan here).

Nine years and two albums later, a veteran Omar headlined a sold out house April 21 at the Mod Club Theatre in Toronto, where lovely Ivana Santilli, whose own eagerly anticipated second CD is due out this summer, was part of the bill.

Omar delighted the crowd with a brilliant set of his classics and was backed by a tight four-piece band and singers who were truly magical. The Father of Nu Classic Soul was in exceptional form.

Omar Lye-Fook was born in the U.K. to a Chinese Jamaican father and Indian mother and music was his destiny. The elder Lye-Fook was a session drummer and founded Kongo Records, which recorded Omar’s first hit single in 1990 – “There’s nothing like this,” now regarded as a soul classic. The track made the 21-year-old singer a big star in Britain and he then signed with Talkin’ Loud (founded by Gilles Peterson). An album of the same name quickly followed and suddenly Omar was everywhere, as global audiences were entranced with his silky vocals and innovative melodies that ushered in the nu classic soul movement, years before American labels, radio and audiences discovered this sound.

“It’s cool to know that people are enjoying music again and they’re not worrying so much about what the latest fashion is,” he said, relaxing at the Mod Club before the show. “That’s what it’s all about and that’s what influenced me to play music in the first place. I just want to get down and play music and have a good time.”

“…Whatever country I’ve been in everybody seems to know my music and I seem to have a lot of celebrities worldwide that seem to know my stuff, ” he said, smiling. “So it makes me think that I must be doing the right thing.”

Truly, there was nothing like Omar and other mainly British crews like Incognito, Young Disciples and the Brand New Heavies who created this special fusion of funk, jazz & soul in the early to mid 90s.

“I’m influenced by a lot of different tunes and styles but I like to try and put my own stamp on things. I always wanted to make my mark and create something memorable.”

“I’m influenced by a lot of different tunes and styles but I like to try and put my own stamp on things. I always wanted to make my mark and create something memorable.”

A big fan of technology, the London-based artist, whose use of reggae, jazz and hip hop endear him to a wide cross-section of the soul-dance community, said free downloading of music on the Internet has been good for his career and other artists should embrace it too.

“For me personally it’s a new way for us artists to be able to promote our music,” he said. “It’s gonna break down the industry in such a way cause the majors won’t be able to control it as much as they did before. People are a bit more discerning now with the kind of music they like to listen to and buy. For an artist like myself, you can get my music on my website – www.omarmusic.net because it was very hard for people to get my music before so I’ve just made it easier for fans to get a hold of it.

“In terms of the bootlegging,” he continued. “That’s stuff’s been around since day one really and I think that artists have to accept that as part of the job…but there’s things you can do to counteract that, but at the same time you have to accept it’s part of the promotion, it’s like giving away free cds – you have to deal with it really.”

And although he’s not familiar with the Canadian urban music scene, he did enjoy his experience working with Santilli, whose new CD includes a song produced by Omar.

“We did a track together called “Deserve” and it’s something we put together while she was down in London for a few days,” he explained. “She’s an easy girl to work with – wicked voice, nice style – the song’s got a nice tempo and is just a feel good groove track.”

With five albums under his belt and a sixth due out soon, Omar continues to impress. And while major commercial (read U.S.) success has eluded him – so far – the lad from Canterbury, Kent continues to sell records and inspire fans and artists worldwide.

“I’m very happy with how (my new) album’s turning out,” he enthused, adding it will include contributions from Stevie Wonder and jazz bassist Bill Lee (father of filmmaker Spike Lee). “It will still be very much Omar, but adding another development – another string to my bow. I like to try and do stuff that’s a little bit different. Stuff which is pushing the boundaries.”