News of Oscar Peterson’s death reverberated around the world, as saddened fans, musicians and dignitaries remembered a man that Duke Ellington once called the ‘Maharaja of the keyboard. 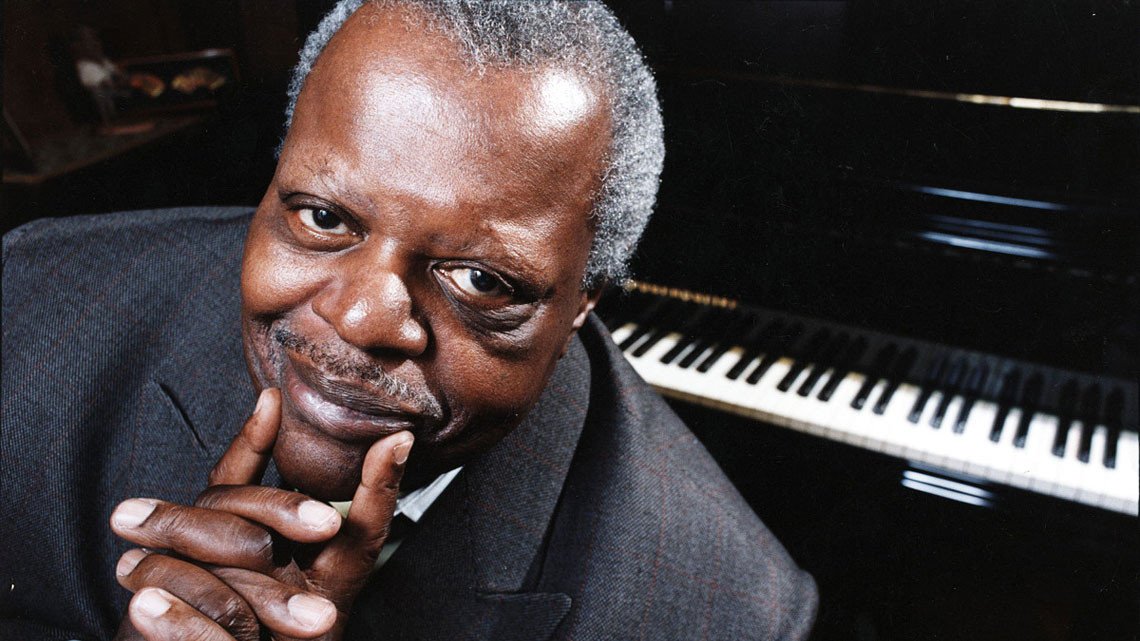 News of Oscar Peterson’s death reverberated around the world, as saddened fans, musicians and dignitaries remembered a man that Duke Ellington once called the ‘Maharaja of the keyboard.’

Dr. Peterson had been ill for a while. He had worsening arthritis that made moving about without a wheelchair difficult, plus he’d suffered a stroke in 1993 that severely weakened his left hand and much of his body. His public appearances or performances were rare. Still, his death came a shock. He was 82 years old when he died of kidney failure at his Mississauga, Ontario home on Dec. 23, 2007.

Within hours of the sad news, tributes poured in from across the globe as the world mourned the loss of one of the most admired, technically proficient jazz pianists of his generation. In a statement, French President Nicolas Sarkozy said, “one of the bright lights of jazz has gone out…it is a great loss for us,” while soul artist Stevie Wonder called him ‘the world’s greatest pianist.’

Peterson’s career is bursting with highlights and triumphs – his jaw dropping, 1949 American debut at Carnegie Hall, more than a dozen honorary doctorates and receipt of all Canada’s highest honours including the Order of Canada. In 1997 he was awarded a Grammy for Lifetime Achievement and, later, he was inducted into the International Jazz Hall of Fame. Three years ago, he became the first living person other than a reigning monarch to grace a commemorative stamp in Canada.

He was known for his driving two-handed swing and rapid-fire solos. He was a keyboard virtuoso, his speed and technical skill often compared to piano great Art Tatum, his boyhood idol. He was extremely prolific, recording more than 200 albums, many for the esteemed Verve label. His trio with bassist Ray Brown and guitarist Herb Ellis is considered one of the finest in jazz history.

Dr. Peterson won eight Grammy Awards and in 2002 a Lifetime Achievement Award from the Urban Music Association of Canada.

At that latter event, a writer was among four people blessed with the task of carrying the late pianist and his wheelchair up a flight of stairs at the Phoenix Concert Theatre in Toronto where Dr. Peterson gave his acceptance speech to an enchanted audience. “Jazz is the original urban music,” UMAC President Tony Sutherland said at the time.

He grew up in Montreal where his father taught him to play trumpet and piano when he was five, but at age seven, after a bout of tuberculosis, Oscar focused on the piano. Peterson has also credited his sister Daisy, a noted piano teacher in Montreal who also taught several other prominent Canadian jazz musicians, with being a major influence on his career.

In the 1940s, the younger Peterson was a celebrity in Montreal, performing on local radio and appearing as the featured soloist with the Johnny Holmes Orchestra. He made his first recordings for RCA Victor in March 1945. Soon after, he formed his own trio while continuing to appear on radio and record.
The story of Peterson’s ‘discovery’ by American producer Norman Granz is legendary in music chronicles. Granz was in Montreal and as he was being taken to Dorval airport by cab, the car radio played a live broadcast of Peterson at the Alberta Lounge. Granz was so smitten by what he heard that he ordered the driver to take him to the club instead so he could meet the pianist. The two quickly bonded and agreed that Peterson would go to New York for his American debut.

On September 18, 1949, Granz introduced his ‘surprise guest’ at a Carnegie Hall Jazz at the Philharmonic show. The Montrealer’s brief performance caused a sensation, launching the pianist, then 24, on an international career of great distinction. Peterson then joined Granz’s Jazz at the Philharmonic tour in 1950, and that year made his first US recordings for Granz’s label, Verve. A star was born.

Almost as big as his talent, was his compassion for others less fortunate. Having faced racism and hardships himself, he was always quick to help the downtrodden. Another memorable tale involves the time when. while recovering from a 1993 stroke that severely limited the use of his left hand, he gave a benefit performance with just one hand.

Writer Darlene Hendrickson attended that concert with her friends. “It was after he had his first stroke,” she recalls. “And I think his people wanted him to cancel, or postpone the performance, but he came out and played a few pieces with one hand. And we were shocked. ‘He’s playing with one hand – most guys can’t play that well with two!” she says, laughing. “And it was like not a big deal for him… he took it in stride and kept performing.”

“He was an honorary patron of the Hamilton All-Star Jazz Band,” said band volunteer, Larry Paikin. “That meant a lot to us. Especially when the kids went over to Montreux to play and Oscar was our patron saint. We remember the work that he, Ray Brown and Phil Nimmons did as teachers, too. We all miss Oscar.”

Adds Gloria Martin, entertainment editor, 680 News, Toronto “What also touched me the most, speaking with him years ago, was his work as a champion for children. He believed good music could change their lives for the better.† In that too, he was brilliant.”

Oscar Peterson was Canada’s greatest music export and the finest piano player of his generation. His Canadiana Suite album, recorded in 1964, was nominated for a Grammy Award and Peterson called it “my musical portrait of the Canada I love.” In 2008, this work and his “Hymn To Freedom” were both inducted into the Canadian Songwriters Hall Of Fame, and Dr. Peterson was made receipient of the prestigious Founders Award.

“He put a bigger spotlight on Canadian jazz artists. It made people think, ‘hey I wonder what other talent they got up there?’” said drummer Archie Alleyne. In an interview with CBC.ca, Tracy Biddle, whose late father Charles owned Biddles Jazz Club in Montreal and who was a personal friend of Peterson’s, said “He really put Montreal on the map of jazz. I believe that on a grander scale, the impact he had on the black community and on the whole musical community was huge. “He broke out of Canada. He’s one of the first people. We talk of CÈline Dion, and Shania Twain, and Alanis Morissette and Bryan Adams. Oscar Peterson did what they did years ago as a black person. So what he’s done is incredible.”

“He opened the door for a lot of Canadian musicians over the years. Not only for me, but others through his school,” Alleyne says, remembering fondly the Toronto-based Advanced School of Contemporary Music, which Peterson founded in 1959 with Ray Brown, Ed Thigpen and Phil Nimmons.

The school’s goal was to teach young, jazz musicians from across North America. It closed in 1964 as Peterson focused on his performing career. Peterson later taught at York University where he was appointed adjunct professor of Music in jazz studies. He served as the school’s Chancellor from 1991-1993.

Veteran music writer Larry LeBlanc remembers Peterson as the bond between jazz eras of the past. “Oscar was my link to such jazz pianists as Art Tatum, Teddy Wilson, and James P. Johnson who each influenced him in his early days,” LeBlanc said in an email. “From listening to his recordings dating from his 1940s RCA recording of “Sheik of Araby” (I still have a 78 rpm copy) to his “A Night In Vienna” DVD in 2003, I remain in awe of his musicianship. He was also, of course, a significant composer with his “Canadiana Suite” being his master work.”

At a special tribute in January in Toronto, Dr. Peterson’s wife and daughter accepted a Lifetime Achievement Award on his behalf from the International Association of Jazz Education (IAJE) as part of its 35th annual international conference. He joined an illustrious list that includes McCoy Tyner, Miles Davis, Sun Ra, Sarah Vaughan, Nancy Wilson and Ramsey Lewis.

At a free tribute concert that same weekend at Roy Thompson Hall, admirers lined up more than 12 hours and when the 2,500 free tickets were snapped up, thousands more stood outside and basked in the glow of the boy with the quick fingers from the Little Burgundy neighbourhood in Montreal, who grew up to become a jazz icon.

The Maharaja of the keyboard left a rich legacy and catalogue that will be enjoyed and worshipped for generations. He was a musical giant in every sense of the word.

Cover photo courtesy of: The Star

Previous post AFRICA IS: NOT A VICTIM OF CIRCUMSTANCE