One thing that has remained the same is that we have always been surprised by Outkast. The double cd, though different from what we have come to crave from the 'Kast, is dope. 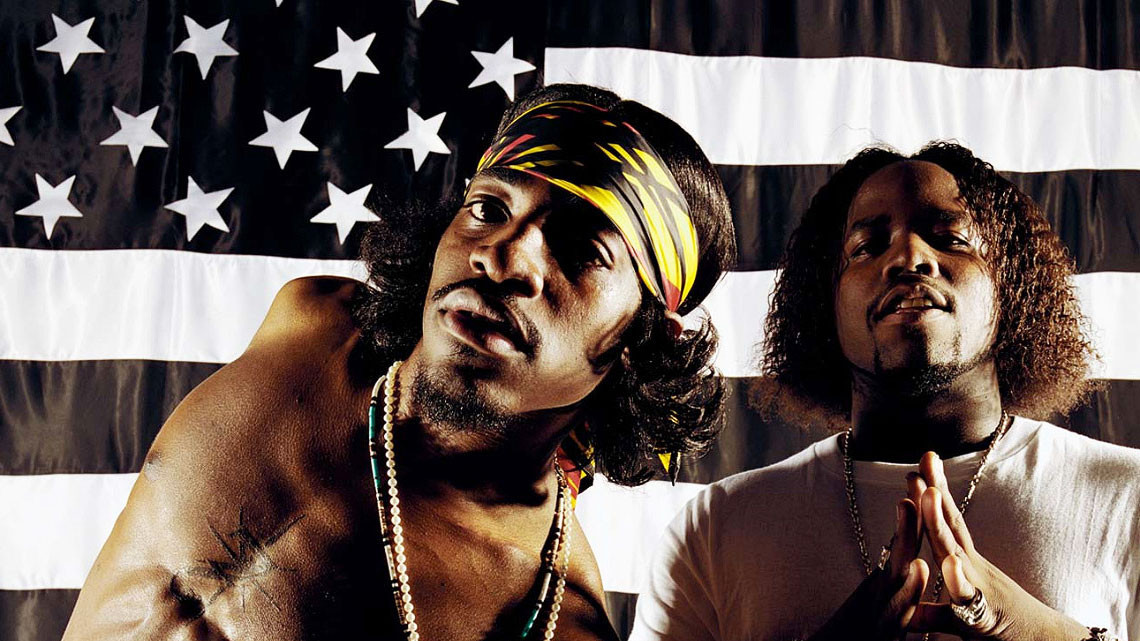 When Outkast’s first single, “Players Ball,” was pressed and mailed to DJs, record stores, and radio stations across the continent in the spring of 1994 after previously being released on a 1993 Arista Christmas Day compilation, the impact of what would follow could not have been imagined. Since then, in terms of both sales and producing top quality music, Outkast is highly deserving of the title of Hip Hop’s most consistent group, yet it is their hugely successful inconsistencies that have kept them at the top of the game.

Aware that past achievements are not enough to keep you relevant and hold no promises of future success – as Andre said on “Rosa Parks,” “You’re only as funky as your last cut, focus on the past and your ass’ll be a has what” – Outkast have continued to reinvent themselves, and the music that they are a part of.

Though they are among the south’s most influential innovators, Andre is quick to recognize the undeniable first national intro to the region’s Hip Hop as being from The Geto Boys who dropped “Mind Playing Tricks On Me.” Outkast added to this tradition in new ways with their debut album Southernplayalisticcadiallacmusik, cemented their place in the game with Atliens, blew minds with the musicality of Aquemeni, and reached pop-star status with Stankonia. With that said, any more efforts from the ‘Kast have a huge set of precedents to meet. As difficult a task as meeting such high standards can be, honesty with themselves and their audience has always seemed the key to their remarkable achievements in Hip Hop and is the essence of their approach on the latest double cd release.

Proof of the power in their honest approach can be found in the relative failure of other groups who chose to let differences be concealed or to break them up. When EPMD squashed their beef and released Back In Business, the common sentiment was that the heart was not really present in what seemed to be a ‘let’s get together to get paid effort.”On another level, imagine if Destiny’s Child released a triple cd with Beyonce, Kelly, and Michelle each having their solo album in a triple cd. Not to say that they each were not successful, but the potential of such a move could have been tremendous. Big Boi and Andre, clearly, have different approaches to music these days and have expanded as artists to the point that it was necessary to put out a double cd to accurately represent the musical landscape that they, combined, cover.

Though different, there is not a clear separation, just maturity. We actually have Big Boi to thank for much of Andre’s eccentricity and experimentation. Andre comments that, ‘I be like self-conscious about what I’m doing. Even when I’m singing, no one’s in the studio when I’m singing, ‘always just me and the engineer.”

After the initial burst of creativity, Andre often finds himself wondering if people will like it.

Andre smiles speaking of the way that Big Boi responds to his own doubt: “He be just like, ‘man, as long as you’re telling the truth, and saying some real shit, no matter what you’re doing.” Andre takes from this that “in Hip Hop, they just want you to keep it real, so it don’t matter what you’re doing.” As for the current group chemistry, he adds that, “When I’m doing all my songs with Big Boi, he’s pretty much like the Outkast anchor. No matter how far to the left I go, he’s always honest with me.”

Being a super-group with an intense chemistry, the rumor of the double cd was, and remains, disappointing to many. In this, there is a huge paradox. Andre, being an exceptionally gifted rapper, remarks that, “I never thought that I was going to be in music. I thought that I was going to be an architect or someone who drew people in court. So when people say ‘you got great rhymes,’ I’m like ‘thank you.’ As far as why he is not rapping, he explains, “for me to say that I don’t have anything to say, I have something to say, but I just don’t have it to say in rhyme form right now, and I hope that it’s not a big let down to people. I hope I’ll be able to catch them on another album or something like that.” Aware of the disappointed he adds, that, “I’m sorry if they’re disappointed. This is what I had to do at the time.” As an attempt to comfort those feeling wounded, Andre, in a promising tone, informs fans that “We have other Outkast albums coming out, and maybe I’ll have something to talk about (in rap form) then. We are actually talking about the next three Outkast albums now, which won’t be split things.”

Where Speakerboxxx (Big Boi’s contribution) is much closer to what we have come to expect from Outkast, Andre’s, The Love Below, is a very personal discussion of the inner questions he is facing regarding love and relationships contained within a thick range of musical formats. The question which keeps arising out of his divergence from the traditional Rap form is this – is it still Hip Hop? Andre will admit that it’s not a rap album, but contends that “yes, it is Hip Hop.” His conclusion is not just his hope, but is supported by a strong understanding of musical evolution:

“Since the beginning of slavery days, people hummed songs of communication.”

“This is their way of saying what’s going on with them and talking to other people in the camp, you know humming negro spirituals songs and whatever. So I mean that style of music changed over into Blues, and then you got Blues singers singing about what’s going on and that changed over into Jazz, and Blues to Rock ‘n Roll, and then you get this American music. Then it grows and grows and then you get to Hip Hop, and we still doing the same thing, you know. So it’s always going to be there, it always going to be our way of saying our troubles, or our blues, that’s why they call it R&B. A lot of people don’t know what R&B really means. It’s just Rhythm and Blues. It’s just the beat with blues on top of it. It is always gonna be around.”

In this understanding, all these forms of music are encompassed in Hip Hop. As for the content, it is a musical movie of a man who is both searching to fill the void of a lack of love, while also being scared of finding love. “That’s what love hater is about. A love hater is a person that hates love, not hates love, but he really don’t want to be in it because he know how people can get hurt from it, but at the same time he flips and be like, ‘man, I don’t want to grow old alone.’ So everyone needs someone to love. So it’s like a back and forth type thing that I think a lot of dudes go through, you know.”

At first listen, both the music and lyrics are beyond what heads are really used to, but what he has done is a first for the Hip Hop generation. No one has so thoroughly articulated the sentiment of our age of, ‘you’re young, don’t get tied down too early, have your fun first.” On his own status, Andre comments that, “I don’t think I’m ready for a relationship right now, but I think, when it get late, you be like man, maybe it wouldn’t be so bad to have a girlfriend, you know. Then you don’t want to play with nobody’s emotions once again, so you’re like, ah f it!'”

One thing that has remained the same is that we have always been surprised by Outkast. The double cd, though different from what we have come to crave from the ‘Kast, is dope. Referring to the initial difficulty in getting their music heard due to the fact that they were from the south, Andrea’s comment seems eerily relevant to the reception of the new album: “I don’t think it’s cos they didn’t want it, it’s cos they wasn’t used to it.”

Loved by many, questioned by many. Let me say this: I appreciate the new album, but realized, watching the video for “ATLiens,” that, individually they are great artists, but together – on the same track – they are greater. While we bump to Speakerboxxx / The Love Below, we are waiting and hoping, like with Lauryn Hill’s MTV Unplugged album, that this is just a transition period.