THE TIMELESS MUSIC OF SERGIO MENDES 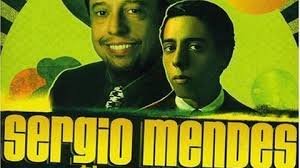 WORD Magazine has opened up the vaults for a variety of stories  — this time on one of Brazil’s biggest stars who helped to introduce Brazilian music to North America. This release finds him in a Brazilian music meets hip hop collabo with producer wil.i.am. Writer, Jude Kelly brings us the story:

Soccer, God and music – in that order – are the prime motivators for most Brazilians, whose love of sun, sand and a good party is legendary.

Mendes, the former classical music student and his now legendary band, helped popularize the percussive samba sound that today personifies the muse and spirit of Brazil.

It was 40 years ago that Mendes and his band Brasil ‘66 stormed out of the box with an album that included the masterpiece “Mas Que Nada,” that’s now the unofficial anthem for “The Little Canaries,” Brazil’s national soccer team.

“The most important thing for me is to bring the great melodies of the Brazilian songbook to the kids today who might not had a chance to hear this music,” explains Mendes, who first worked with wil.i.am on the Peas’ Elephunk. “I’m into melody and Wil is very much into melody – it was a good fit.”

Even though he’s released more than 35 albums, Timeless is Mendes’ first album in almost a decade. The disc features guest appearances from some of the biggest names in pop and soul, including Stevie Wonder, india.arie, Jill Scott, John Legend, Erykah Badu, Justin Timerlake, Q-Tip and Brazilian funk-rapper, Marcelo D2, who starred in the critically acclaimed flick, City of God.

This album is “all about the same beats we inherited from Africa,” Mendes explains, “because it’s all African rhythms and haunting melodies. It’s the same common denominator that brought the samba to Brazil and brought jazz to America.”

And Sergio Mendes has been bringing it to global audiences for decades. He’s been recording since 1962 and for most of the second half of the ‘60s, was the top-selling Brazilian artist abroad.

Mendes was born in Niteroi, the gritty town that lies across the Guanara Bay from glamorous Rio De Janiero. He studied at the local conservatory as a boy with the dream of becoming a classical pianist. But it was while living in Rio during the bossa nova craze of the late 50s when he abandoned Bach and Beethoven for the bossa nova.

In the mid 60s, Mendes moved to the U.S. and formed Brasil ’65. The following year he renamed the band Sergio Mendes & Brasil ’66, signing with Herb Albert’s A&M label. Their self-titled album featured a new formula: dual American female voices singing in English and Portuguese over a bossa nova rhythm/vocal section. The album’s big hit was a cover of Jorge Ben’s “Mais Que Nada,” which quickly proved more popular than the original.

Mendes has been a global star ever since, performing that hit and many others all over the world. His career includes numerous hit albums and a 1993 Grammy Award for Brasileiro.

Interestingly, the cover art for Timeless features a handsome shot of a young Mendes, then just 24-years-old, as it originally appeared on his 1965 album, The Swinger From Rio. Now 65, Mendes is just as hip as ever and loved his experience working with a new generation of urban stars.

“From the beginning, Will and I decided to revisit many of the classics…which I had recorded in the past,” Mendes explains. “The combination of those great melodies and Will’s urban vision inspired me to bring those classics to a new dimension and to the streets of the world, and I had a lot of fun with it.”

The album was recorded in Brazil and California.

Mendes loves every track on Timeless, but has a special fondness for “Mas Que Nada,” “The Frog” and “Let me,” which he calls his favourites.

Okay, now let’s talk soccer. Brazil is the defending World Cup champions and top seed at this year’s tournament, which opens in June. Naturally, Mendes is a big Brazil fan so our reporter had to ask him who would finish ‘second’ at this year’s tournament. Ever the diplomat, Mendes, turning sports analyst, says “Argentina is always strong, Germany is hosting and will be tough. Japan been’s training very hard and the African countries are on the rise. It’s not gonna be easy for Brazil.”

Only time will tell what develops on the pitches in Germany. But one thing is certain, Timeless will leave everyone speechless for years to come.