New York-based turntable group the X-ecutioners were among the first all-DJ outfits to sign a recording contract, and the first to release a full-length album focusing on the art of turntable tricknology. 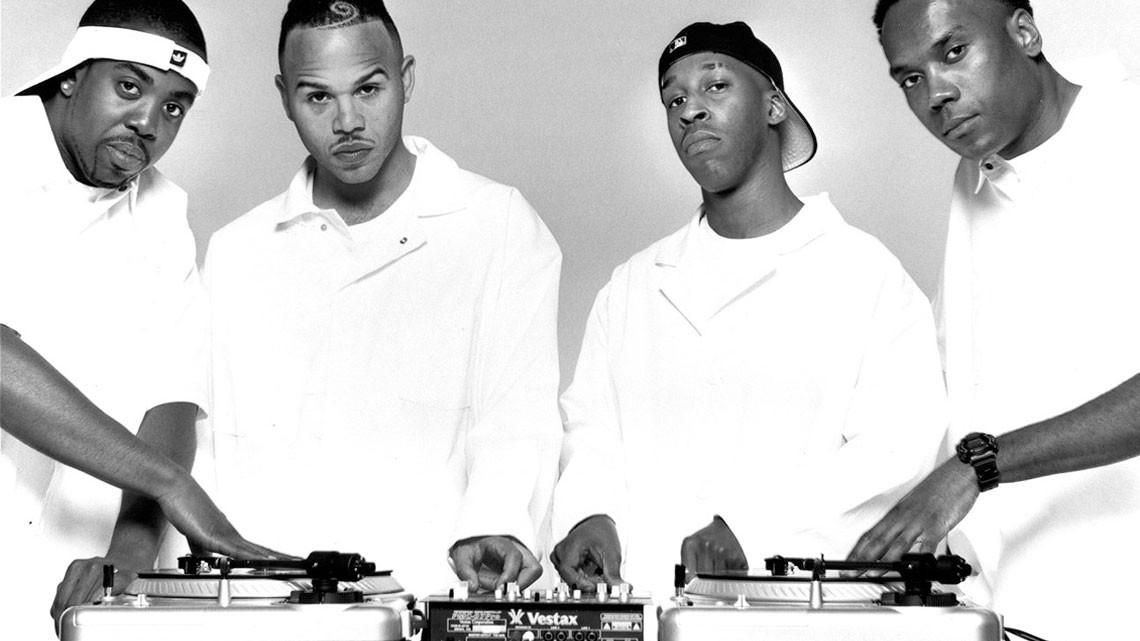 It’s always better when it’s “built from skratch.” Whether you’re making pancakes or building a house, there’s always a deep feeling of satisfaction in taking a bunch of ingredients and creating something new. That’s the case with the X-ecutioners, who’ve taken a variety of musical elements to bring you their new album, Built From Skratch.

In 1989, Rob Swift, Roc Raida, Total Eclipse and Mista Sinista set out to attain DJ dominance in New York City. Under the name the X-Men (changed for obvious legal reasons), this crew of four stayed together and their teenage fantasies of DJ dominance became a reality. With ITF, DMC, and various other titles under their belts, along with an unquestioned ranking among history’s greatest DJs, what next?

Amongst their many contributions to hip hop, you may have heard these DJs on such classics as O.C.’s Time’s Up, Organized Konfusion’s The Equinox, Rob Swift’s The Abilist. In a hip hop climate where the DJ, the backbone of the form, who was first overshadowed by the MC and is now neglected by the preference for sing-song hooks, the X-ecutioners have put together a 17 track release that brings the DJ back to where he/she needs to be.

With guest MCs such as Large Professor, MOP, Inspectah Deck, Big Pun, and Everlast, you’d think the album would be a sure-shot. But the X-ecutioners haven’t rounded up hip hop’s most respected for self-validation. The album features visionary projects like DJ/producer collabs with Primo and Dan the Automator, a joint with beat box champ Kenny Muhammed, and a remake of old-skool classic, Play The Beat.

Both Roc Raida and Total Eclipse explain that “it’s all hip hop, but the core, instead of being the vocalist rhyming and spitting like crazy, it’s all from skratch.”

I’m sure when people heard what Miles Davis started doing on the trumpet and what Thelonious Monk started doing with the piano, there must’ve been all sorts of reactions. The things they were doing were unheard-of, and now the experimental has become the fundamental. Similarly, the use of the turntable is taken to new heights on the album. If you don’t believe it’s an instrument, try to make the sounds Roc Raida does with one.

The lead single, the collab with MOP called Let It Bang, stands out with a thrashing beat juggle and skratches laced into the production, complementing the guitar loop and MOP’s “ffffiiiiiyaaaahhhh!” Total Eclipse broke down the song, and how it represents the album, saying that “a musician has different moods and styles, like a pianist will have times where he’ll feel hyper and energetic, and that will reflect in the music. That’s what we did with MOP, where he had the fierce skratches.”

After 13 years as a crew, and over 20 of the music industry releasing hip hop records, only now is a turntablist album being marketed by a major label (Loud/Sony). Total Eclipse explains that it’s happening now because “they’ve seen something in us that has potential the masses will gravitate to. If it wasn’t for the pioneers, we wouldn’t have the vision to take this to where we do.”

Roc Raida feels good about their status. “My goals are still the same, to be creative and still practice like I’ve never won a battle and been world champion.- just to be on point like any other DJ in the bedroom coming up who wants our spot. Now people respect us as great DJs, we gotta hold our spot.”

For the X-ecutioners, music goes back to their earliest memories. Roc’s dad was part of the Sugarhill Records crew – hip hop pioneers. Raida recalls that “I was a part of that history at an early age. I’d be off at the side looking at the turntable.”

Roc Raida calls the habit of record-collecting “second nature. It’s a never-ending thing, all these records I need.” Total Eclipse stresses “I’d love to be teaching the youth to be knowledgeable about the turntable. We represent a true element of music that’s never really been taught in the sense of composing or exposing it the way we do. I’d love to start a school, but it all starts from the album.”

“The root of what we do is spinning at parties and being knowledgeable about what we play. There’s also the artistic part, creating different rhythms and beat juggling. Don’t be limited to one aspect of DJing,” he advises.